A photo of daffodils, from Wim's blog.

A whimsical fedi music collaboration between Wim and Eidon. This is a twin post, the other version is on Wim's blog.

Here is the finished track. We hope you like it!

“It all started from the title, really. “Daffodils”. Nice word, which reminds of many things – an Arcadia of beautiful flowers and their scent, or Wordsworth’s famous poem, for instance. Among the many spurious thoughts that such a word could evoke, there was one that triggered the resolve to create a piece of music from it: the presence of letters that can be interpreted as note names, together with others that can not. Of the many possible mappings, this one was chosen: 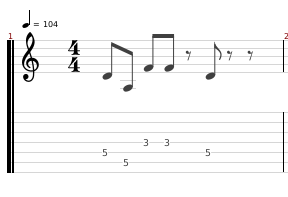 where ‘real’ notes where used when a music counterpart existed, and `imaginary’ (inaudible) notes otherwise. The singular form led to 8 quavers and an easy 4/4 metre. The result was found sufficiently interesting and worth pursuing, and a composition was started from there. Three voices, initially appointed to two electric guitars and electric bass, with the theme exposed and repeated by the first guitar, soon joined by the cortege of its companions, all moving in an ostinato slow-pace.

In retrospective, it is possible that, from the very beginning, it all was leading to Wordsworth’s poem – the choice of the tempo, for instance. Whatever the actual case, at some point it became clear that the connection with “I Wandered Lonely As A Cloud” had to be made explicit. At first we thought to only sing the poem’s final verses; and then Wim had the great idea to recite the whole poem.

The track was created with TuxGuitar, a nice tabulature editor whose notes input interfaces include guitar fretboards. So yes all the instruments you can hear in Daffodils have been composed… on guitar ^_^. Some of the sounds were produced via the Timbres Of Heaven soundfont, while for others we used MuseScore, after importing MIDI files exported from TuxGuitar.

MuseScore is much more powerful than TuxGuitar. It allows to orchestrate voices from multiple soundfonts at the same time, for instance, and to export the voices as separate audio files. Once the voices have been chosen and isolated, we used Audacity to orchestrate them together. The original TuxGuitar voices were then mixed with MuseScore voices from the Sonatina Symphonic Orchestra, and the Nice Keys Suite soundfonts, plus that of a Steinway piano.

Audacity is perhaps not the best tool one could use, though it has certain valuable features. One such feature is so-called Envelope Tool: with it, it is possible to finely control the volume of each voice. 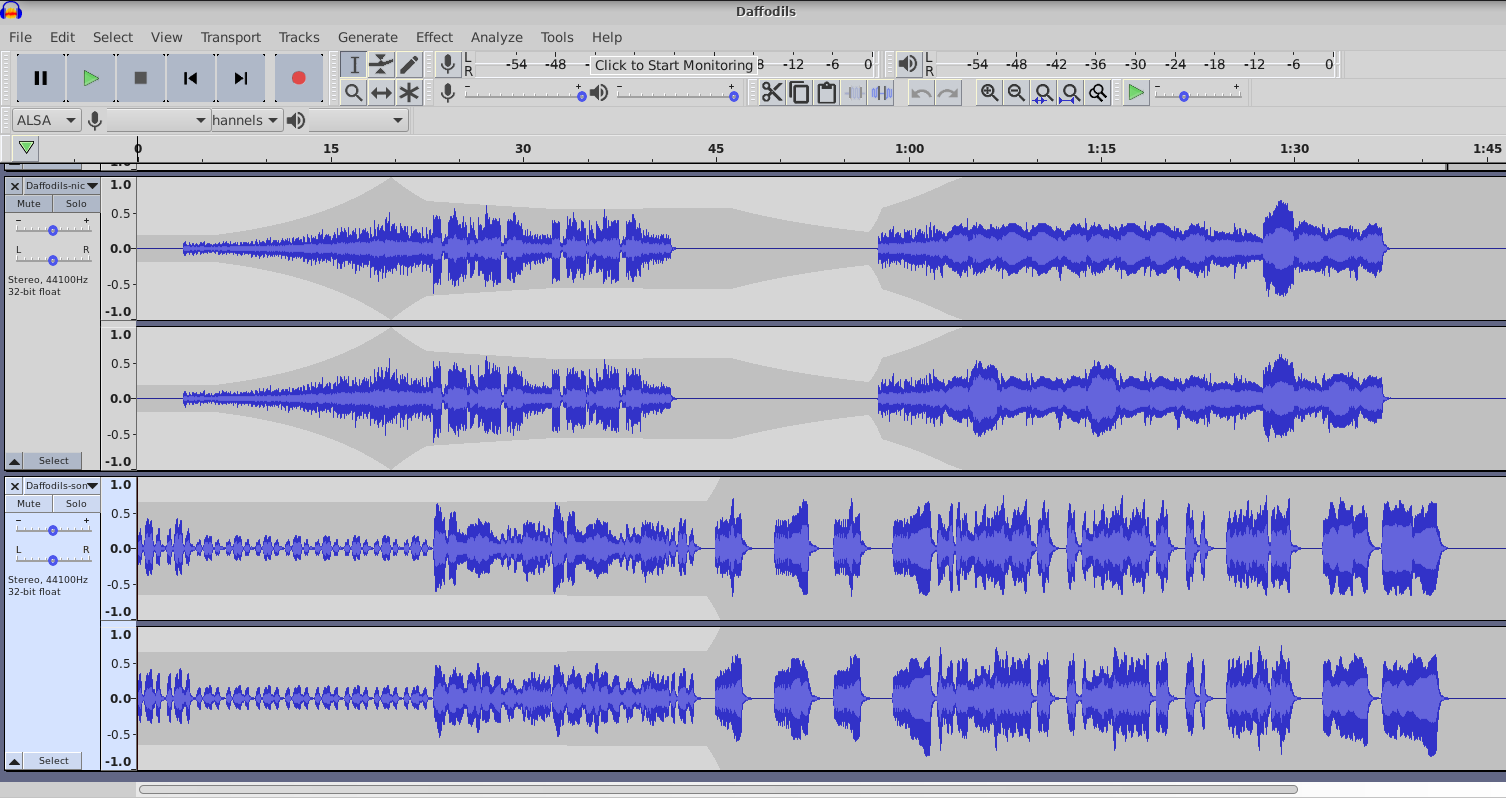 Each voice is wrapped in a “control envelope”, which changes the volume of the track proportionally to the ‘height’ of the envelope.

This allows fade-ins and fade-outs, and thus can simulate the entrance and exit of instruments. This has been used extensively in Daffodils! “

“Eidon wrote this great track “Daffodils” as he explained above, and he sent me a draft and asked if I could recite the verses from Wordsworth's poem. I don't know what he thought my voice would contribute to the work, maybe he wanted a Flemish-Scottish accent?

Eidon had in mind that I would recite the final two verses only:

And then my heart with pleasure fills,
And dances with the daffodils.

But I misunderstood him, and I recited the entire poem. That turned out to be serendipitous, as we are both happy with the final result. But I'm running ahead of myself.

I used my laptop's built-in mic as that is all I have. The audio quality is acceptable but far from great, so from the start I had this idea that I wanted to apply some distorting effects to the voice. I thought it might work well with the track which is quite modern and rather different from what a more conventional composer might associate with the image of daffodils.

I'd never done this before, so it was an interesting experiment. I used Audacity for the recording and for all processing.

I recorded the audio in two takes, and combined the best parts. There is nothing to say about the recording: I just read the poem out loud, at a pace that seemed natural to me.

I then also doubled the voice, with a very slight shift between the tracks, so there is no perceptible echo but the sounds is a little bit fuller.

Initially I had wanted to use only the vocoder. But Audacity's Vocoder effect is not quite what I had in mind.

The default setting for the Vocoder results in a rather tame distortion. My settings are

The result is a bit like speaking through a tube, with added radar needles, a series of short pulses which give a robotic effect.

I found that the Phaser could introduce some interesting distortions. Again, the default effect is quite tame. I used the following setting, on a separate copy of the voice track:

The result is a space-like oscillator sound overlaying the speech.

I was still not happy with the result so I added another copy of the voice track Reverb using the “Church Hall” preset, which gives a huge echoing sound.

I combined these three tracks with the original one, taking care that I did not entirely drown out the recitation.

I then combined this track with Eidon's music. I tweaked the pauses between the verses to match the music and tweaked the volume of the voice here and there.

The final verses are repeated three times, because somehow I thought that fit with the music.”

“No greater bias than the authors’ opinion, maybe, though we are quite pleased with the results. Music and verse dance together, and hearts with pleasure fill. Therefore, it is likely that this first move into musical/poetical co-creation shall be followed by new experiments soon!”

The track is available on OpenTube:

Daffodils and Other Stories will grow little by little on FunkWhale:

This work is licensed under a Creative Commons Attribution-NonCommercial-ShareAlike 4.0 International License. By Wim and Eidon, https://octodon.social/@wim_v12e, Eidon@tutanota.com.